With the recent arrival of Six by Nico, Edinburgh is abuzz. From the most dedicated of foodies, to the wretched souls who think Bella Italia is “a wee bit fancy,” we’re all asking: have you been yet?? Our answer: Yes, of course we have, and we LOVED it. 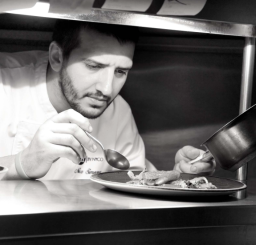 Having already wowed the weegies, Six by Nico has now opened a branch in the capital. It’s the brainchild of award-winning chef Nico Simeone, who has previously worked at the Balmoral’s Michelin-starred Number One.

Nico’s concept and menu are simple: six courses, one theme, and no choices (aside, that is, from carnivore versus vege). Then every six weeks, there’s a brand new theme and six new courses.

The current menu is called “the Chippie” – which reimagines the iconic tastes traditionally found in a Scottish fish and chip shop.

Though while a theme and set menu is a novel approach, what’s really astounding is the price – just twenty-eight quid. And guess what, you even feel full afterwards. But let’s start at the beginning …

Now is the winter of our discontent.
William Shakespeare

Friday night, and once again Edinburgh’s temperature had barely risen above zero. So, along with our fellow foodie Kerry Teakle, we attempted to find warmth in a bottle (or was it two?) of viognier.

Temperature and mood elevated, we then arrived at dinner a fashionable ten minutes late. Even so, we discovered – quelle horreur!! – our table wasn’t ready.

The culprits were a dilly-dallying party of six, whose snail-like approach to
paying the bill, meant we were forced to stand awkwardly by the entrance. 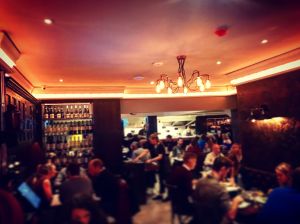 The staff couldn’t have been friendlier or more apologetic. Even so, I looked at Isaac and wondered which one of us would be first to go full-diva. Kerry meanwhile looked nervous, or maybe thirsty? We’re not quite sure.

But then, something wonderful happened … the maitre’d apologised once more, and announced complimentary bubbles were en route.

Like the cheap whores we are (underneath), we were instantly won over. This lovely man also went on to make sure that none of that “we-will-require-the-table back-after-two-hours” nonsense would apply to us.

Already we were extremely impressed …

After a good dinner, one can forgive anybody, even one’s relations.
Oscar Wilde

The restaurant was humming, possibly too noisy for some, but definitely no shortage of atmosphere. And with a few sips of bubbles still to go, we found ourselves seated and ready to embark upon six courses.

The menu gets off to a bold and fabulous start thanks to the Chips & Cheese, aka parmesan espuma (that’s soup btw), with crisp potato and curry oil. Wow! 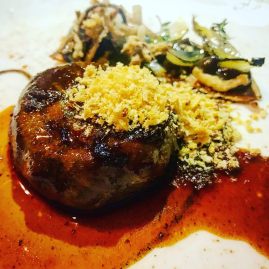 While it conjures the very essence of this popular delicacy, Nico’s take is delicate, sophisticated, and utterly creamy. Dive in and you’ll find thin strands of crisp potato that make it an unbeatable combination.

This gorgeous dish is soon followed by the Steak Pie – Speyside Beef shin braised in red wine, with caramelised & charred onion. Wonderfully succulent and beautifully flavoured, it’s over all too soon we’re afraid.

Thankfully, the Scampi is only moments away …

There is no love sincerer, than the love of food.
George Bernard Shaw

More aptly described as Scabster monkfish cheek with pea ketchup, herb pesto and bergamot, the scampi is another superb and nuanced dish. But what we REALLY want to rave about is the pea ketchup.

Long story short, it’s f**king stunning! Potentially more addictive than crack, we are most definitely hooked. And this, let us tell you, comes from two people who don’t much cares for peas. 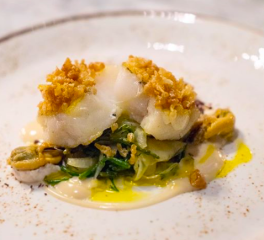 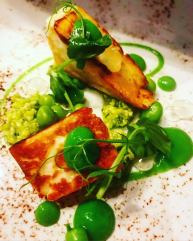 With our plates licked clean, literally, we happily moved on to the Fish Supper – aka Shetland cod, with beer emulsion, pickled mussels, confit fennel, and samphire.

Surprise, surprise we loved this too, with special mention going to the perfectly cooked cod, and the rather lovely contrast of flavours.

After ordering our second (or was it third?) bottle of wine, it was time for the fourth course: Smoked Sausage – Ayrshire pork with salt baked celeriac & caramelised apple.

Now this is a dish with both plenty of taste and drama, as much of the smoking takes place before your very eyes. Then, once the lid is lifted, you cannot fail to enjoy a delicately spiced and tender sausage that simply melts in the mouth.

Anything is good, if it’s made of chocolate.
Jo Brand

Last but by no means least, comes dessert – a cheeky Deep Fried Mars Bar. Now while the original (even if you are completely shit-faced) is really quite dreadful, this reinvention is pure delight.

Who knew, if cooked correctly, it can taste like cookie dough? [ Our local chippie, please take note ] And when served with chocolate sorbet, orange and caramilla nougat it’s an absolute winner. 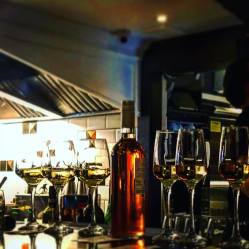 In fact, the entire meal is a winner. While some tasting menus can leave you feeling short-changed, these six courses are playful, imaginative and utterly satisfying. So much so, we could barely manage another bottle of wine (or was it two?).

Anyhoo … as far as Six by Nico is concerned us Edinburghers can definitely believe the hype. And if the Glasgow branches are anything to go by, in the months to come we can also expect themes such as: summer picnic, childhood memories, Vietnamese street food, and even Disney. We cannae wait!

5 thoughts on “Six by Nico: The Chippie”