Celebrating the very best food and drink Scotland has to offer is not only our mission in life, it’s also the thinking behind The Edinburgh Food Festival. Ten glorious days of indulgence, which for the Social Bitches kicked off with several hours of sunshine, sparkling wine, and of course, unabashed gluttony. 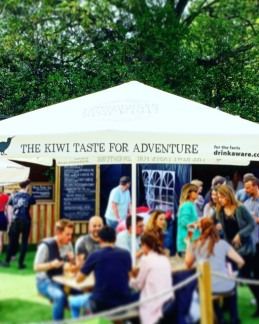 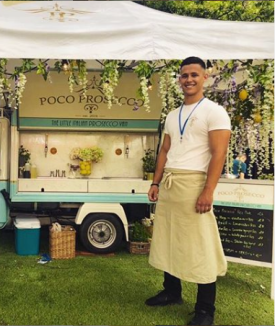 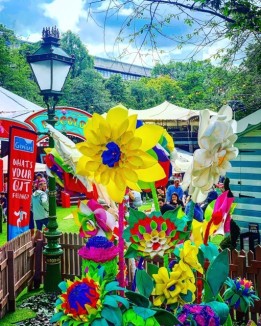 Surrounded by so many fabulous tastes, it’s hard to know where to begin. We decided on a quick circuit of the gardens, so we could form a plan of attack. But roughly ten minutes later, all we’d established is: we’d pretty much like to eat everything; we’re incredibly thirsty; and the man from the Poco Prosecco van has wonderfully muscular arms.

Fortunately there really is no rush. The food, the wine, those muscular arms, they’re all here until the end of the month. Even better, this year’s festival also features a series of free shows based around good food and healthy living.

Everything from yoga classes hosted by the Kilted Yogi Finlay Wilson, to cooking demonstrations from legendary local chefs like the Barry Bryson. 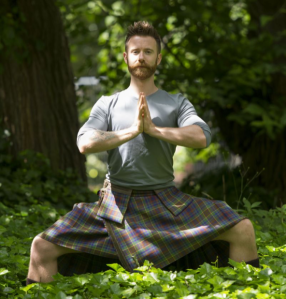 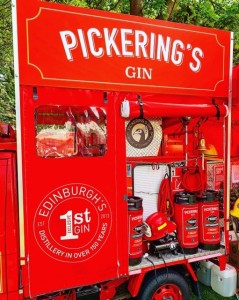 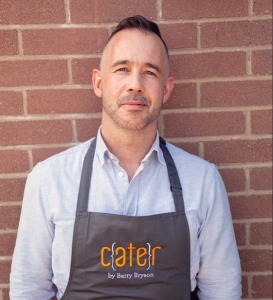 With so much to try, and the sun shining, the atmosphere’s amazing. There’s bustle, excitement, not to mention plenty of opportunity for people-watching. But at the same time, it’s also incredibly relaxed, which means you can happily spend an entire day here.

Which of course, is exactly what we endeavoured to do. Here’s what we discovered on what will be the first of many visits: 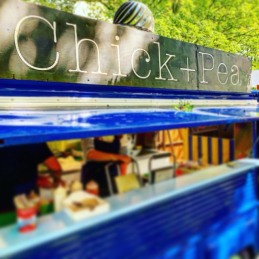 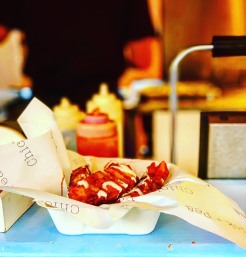 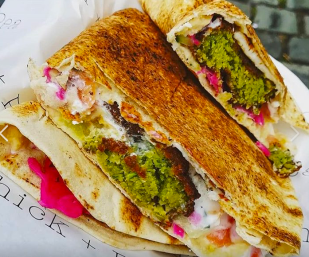 We love these guys!! Offering Mediterranean and Middle Eastern flavours, Chick + Pea’s food is exceptional. We really could not wait to order the Halloumi fries with roast garlic yoghurt, pomegranate molasses, chili & parsley. Utterly out of this world. Though we’re devastated their fabulous Halloumi burgers don’t feature on this year’s menu. No!!!!!! Fortunately, their flatbread wraps look and smell equally as good. 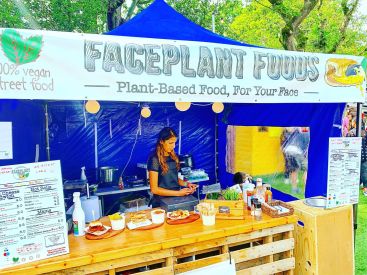 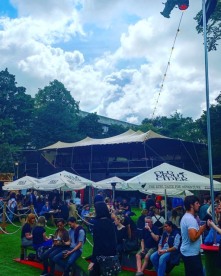 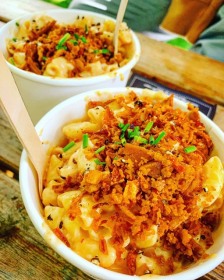 While we’re rampant carnivores, we’re loving the fact our vegan friends are so well catered for this year. Faceplant Foods have pioneered an impressive range of vegan meats and cheeses that make dishes like their incredible Mac ‘n’ Cheese a delicious reality. Achieving the near impossible task of tasting utterly sinful, without being stodgy, we are seriously impressed. 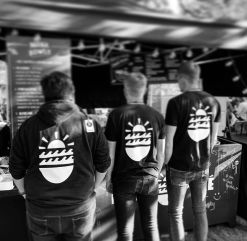 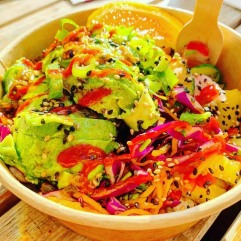 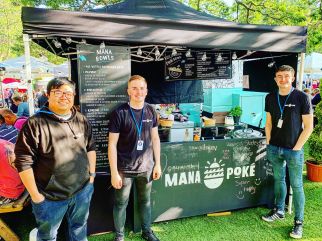 Let’s be honest, who doesn’t appreciate a good poke? Especially when it’s gorgeous Hawaiian streetfood such as this. Mana Poke’s simple premise is delicious bowls of sushi rice, with the freshest of ingredients: fish, pickled cucumber & radish, ginger & garlic, pineapple salsa, and Asian-style slaw. Amazing! Already, judging by the queues of excited foodies, it’s the runaway hit of the festival. 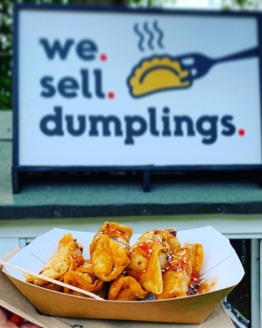 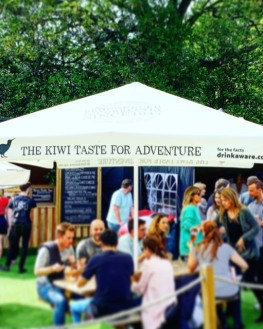 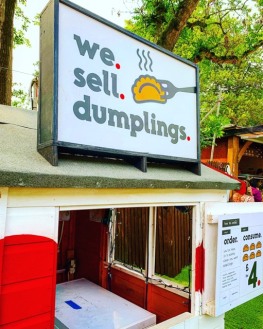 All a meat-obsessed-Isaac could tell me about this fabulous dish is … it’s vegan. So much for investigative food journalism. But what we can tell is: We Sell Dumplings offer just that, deep fried with a generous drizzle of soy sauce, sweet chilli and coriander. Utterly, utterly delicious. 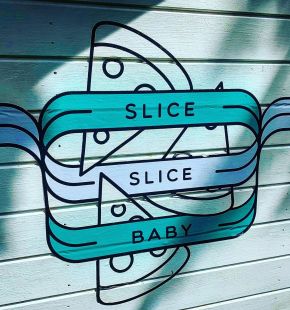 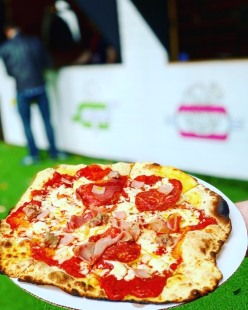 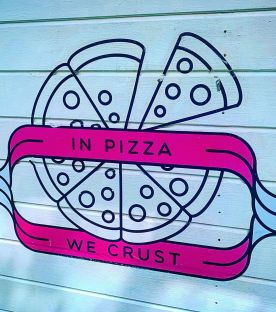 Truly great pizza can be a hard thing to find, which makes Paddle & Peel an absolute delight. Eight classic varieties of wood-fired pizza cooked to perfection. The crust is divine, as it’s somehow thin, soft and crisp all at the same time. And the toppings, wow! We devoured the Carne in seconds flat, with its stunning combination of pepperoni, prosciutto, ham, and game sausage. 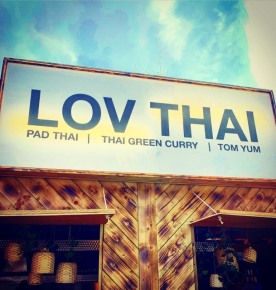 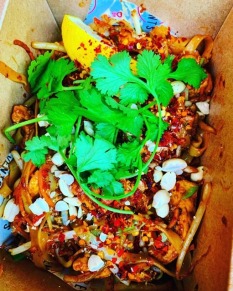 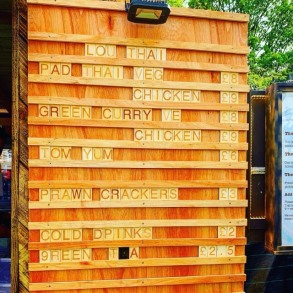 Definitely delivering what’s promised on the tin, Lov Thai is another firm favourite. Offering a simple menu of pad thai, green curry, tom yum, and prawn crackers you can expect plenty of kick, and an incredibly generous serve. We ordered the pad thai, and were delighted by the how much bang you get for your buck. Coriander, lime, peanut and oodles of spicy chicken made these Social Bitches extremely happy indeed. 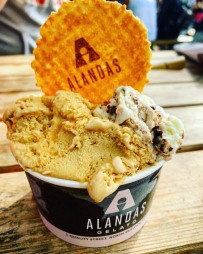 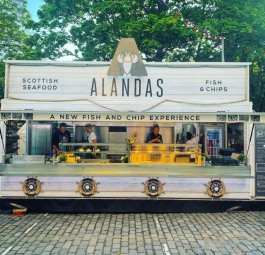 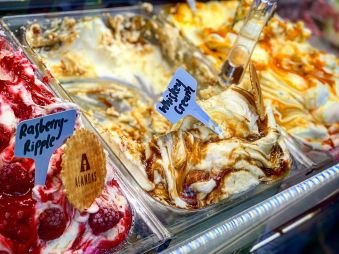 Hailing from North Berwick, Alandas has two stands at this year’s festival. The first boasts what fellow bloggers tell us are mind-blowing fish and chips. Meanwhile the second had us even more excited: award-winning handmade gelato, infused with seasonal local ingredients. Seriously divine. So far, we can highly recommend the milk chocolate, salted caramel, forrero rocher, and the gorgeous raspberry ripple.

But this is just the beginning … 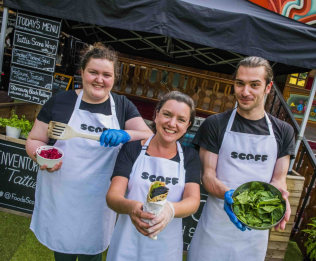 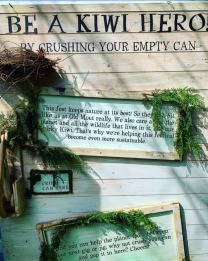 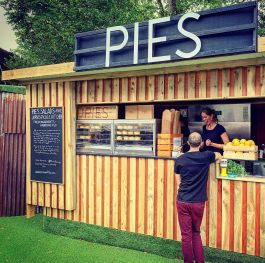 Despite a greed that knows no bounds, even we couldn’t visit every fabulous stand on our first outing. Which is why we’ll soon be back to sample the delights of Punjabi Junction, Pickerings Gin, Scoff, Cargo Spud, Jarvis Pickle, and many, many more. We strongly we suggest you pop on your fat pants, and do the same …