Why it’s taken us so long to make a reservation, we’re really not sure. But FINALLY the Social Bitches have – in a single sitting – happily devoured just about every dish on Baba’s menu. Our verdict: out-f**king-standing! 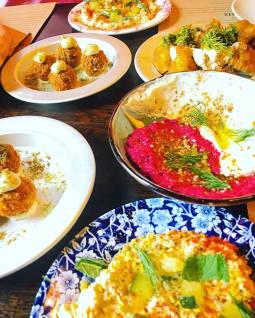 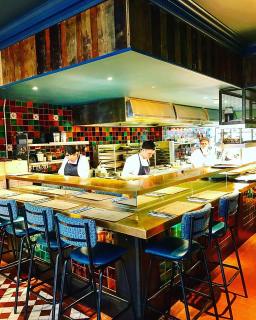 Is it just us, or can hotel restaurants sometimes be, well … a bit shit?

Happily that’s really not the case here in Edinburgh. Our more stylish establishments are not only defying this notion, they’re actively raising the bar. After all, what’s a fabulous décor without cocktails and cuisine to match? Right??

Which brings us to what was the Roxburghe Hotel. Twenty-five million pounds later, it’s now The Principal Charlotte Square, and boasts what could soon be one of our favourite spots for over-indulgence.

Its name is Baba …

Head through its doors and you’ll find an intimate cocktail bar. Go yet further and you’ll discover a lively restaurant, offering Middle Eastern flavours and a never-ending supply of sharing plates.

In other words, what’s not to love? 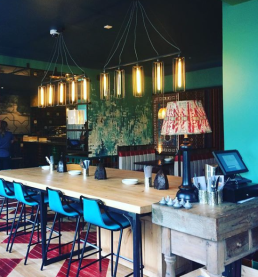 For a start, we adore the décor. Teal and distressed woodwork as far as the eye can see, subtle hints of the Mediterranean, and the bustle of an open kitchen make this a world that’s truly exciting to step into.

We breezed in shortly after three for a late lunch / early dinner, but despite the unusual timeframe the restaurant was absolutely buzzing.

Joining us, our gorgeous friends Colleen and Jack, who roughly two-and-a-half seconds after “hello” suggested a cheeky cocktail might be the perfect place to start.

“Yes!!!” we exclaimed in unison, sounding very much like a porn-star mid-climax.

And speaking of orgasms …

Now while the cocktail menu boasts many a delight, can we just say oh my god the Barberry Sour is incredible.

Containing a perfect blend of Glenkinchie 12 year old single malt, date & barberry syrup and Cointreau lemon, it is truly heaven in a glass. We immediately ordered another round. Well, rude not to. Right?? 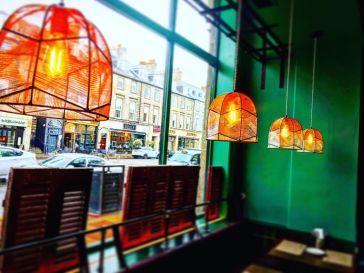 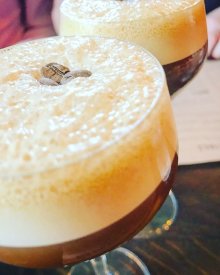 Then we pondered a third, ordered a third, and picked out a cheeky bottle of bubbles before finally remembering we were actually there to have lunch.

Oh how we laughed … though eventually we decided to choose “just a few” sharing plates to get the ball rolling.

Naturally the Hummus is fabulous, but add beetroot, whipped feta and hazelnut dukkah and lashings of grilled pitta bread and you really have a party. Especially when its neighbour is the Goats’ cheese with pistachio, lemon and courgette.

The Cauliflower fritters with zhug and creme fraiche – as recommended by an equally indulgent friend – are also 100% a must have. And as for those Harissa spiced haggis balls, come to Daddy!

Though before long, we’d somehow reached a total of fifteen separate dishes. Oops. Our waitress looked up, and in the nicest way possible explained this was actually a truckload of food. Were we sure??

But like the greedy fat bastards we are, the four of us laughed off her warning and added yet another round of barberry sours.

Our food began to arrive at the speed of light. So much so, we soon ran out of room – the table we mean, not our ever–expanding stomachs.

First up … the Lamb shoulder with ptitim, preserved lemon and tahini yoghurt – best dish ever – and then there’s the Slow-cooked pork belly with charcoal-baked celeriac and golden raisins. It’s all too, too delicious.

Next, we think, came the Baharat beef kofta with butternut, yoghurt and aleppo chilli. Spontaneous moans of pleasure ensued, as the wonderfully seasoned beef melted in our rather sizeable mouths. 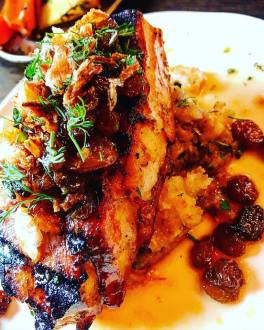 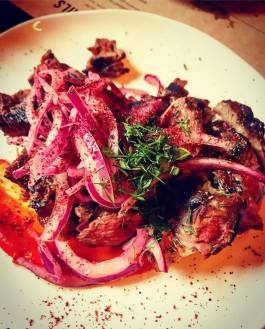 It was soon joined by the Onion squash with beetroot, halloumi, pickled lemon with nut dukkah, prompting our rapturous applause.

Oh, and lest we forget, the chuck-eye steak with sumac onion salad and red pepper ketchup! It’s utterly mouthwatering.

Add to that more wine, and another round or two of those cheeky barberry sours, and you’ll forgive us if the memory gets a little sketchy at this point. 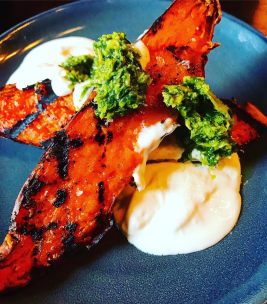 Yes, six dishes seem to be missing from this review, but suffice to say everything was – hand on heart – just wow! Beautifully presented and a pleasure to eat, we have (waistlines aside) not a single criticism to make.

So despite our waitress’s concern we may to able to tackle all fifteen plates, pretty much all of them returned to kitchen practically licked clean.

Our only regret … we didn’t go for sixteen, and have the Venison peppercorn carpaccio with feta and roasted hazelnuts as well.

Though needless to say, we did require at least thirty minutes and another barberry sour before ordering dessert.

But once ready, we very much enjoyed the Baba ice sundae, and the dazzling Vanilla and cardamon muhallabieh, with rhubarb, pistachio and ginger.

Unlike the intense flavours of the fifteen dishes that preceded, these are altogether subtler, but no-less delicious. That is, if you can find the room.

Fit to burst after this truly wonderful meal, we then somehow staggered to Baba’s cocktail bar and managed to squeeze in more teensy bottle of wine.

Yes, we know, what f**king legends!